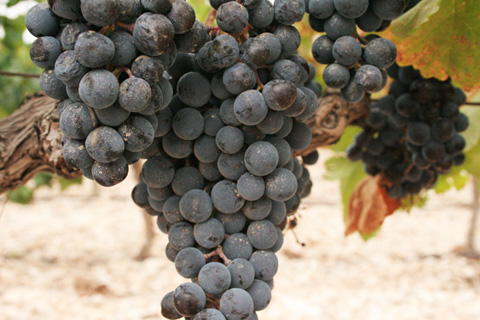 7 Main characteristics of the Monastrell grape

Talking about Monastrell has become in our way of life and we love it.  We have even organized an international congress in Alicante to discuss all his peculiarities at any part of the world. In this post we write the 7 main characteristics about this grape that you should know:

1. Origin: Its existence dates from the fifteenth century and is believed to come from the Valencian town of Sagunto.

2. Name: In Spain it is known as Monastrell, but also as Vemeta, Morastell or Morrastrell.

Internationally it is known under its French name, Mourvèdre, (name derived from the Valencian town Morvedre), and Portugal, and America and even Australia also called Mataro (Catalan population in the province of Barcelona). He is also known as Mourviedro, Murviedro, Alcayata, Gayata, Garrut, Monastrell of Gayata, Espar, Flouron, Trinchiera, Rossola, Balzac, Baltasar.

3.It is a late variety, the harvest usually takes place in late September and October.

4.Its clusters are conical and tight, spherical and small berries with intense black color.

5.Monastrell in Alicante is fresher than in other neighboring regions. It is versatil when combined with other varieties, thanks to soil and climatic conditions of the regions. Its flavor can vary widely depending on the area, wild or wood, with hints of blackberry.

6. Grow in areas with warm weather as the southern French regions, Australia, California and the Spanish Levant, especially in Murcia designations of origin (DO Bullas, Jumilla and Yecla DO) in the Valencian (especially in laD.O . Alicante) and Catalonia.

7. To mix, the Monastrell has great affinity with Grenache, which gives structure and also gives fine table wines blended with syrah, merlot or cabernet sauvignon.